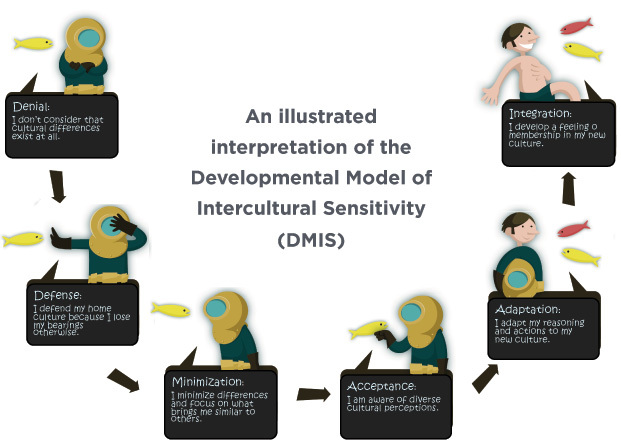 You can find my paper here.

During the second week we were introduced to the DMIS Model as a way to describe a spectrum of acceptance towards other cultures differing from one’s own as a few specific ‘stages’. Our assignment was to write a paper on this DMIS Model. We were to answer a few set questions as well as describing our own position in the model.

Discussing the model with a few classmates I realized there were more people who identified themselves to be on the left side of the model, more ‘ethnocentric’ or ‘mono-cultural’ as it were, than I initially expected in this minor. However, after talking with them it turns out most of their issues with other cultures aren’t necessarily present on a personal basis. They seem to mostly be grounded in fears and insecurities regarding the unknown as well as concerns about the increased stream of migrants.

In that sense, despite seeing myself mostly in the last stage, ‘Integration’, I do also see the more ethnocentric side in me when it comes to recent issues like the migrant crisis.

I have yet to get feedback on this paper from the teacher, I will update this when I do.