The Making Of Mortimer: Personality and Dialogue

In this part I’ll be talking about the making of Mortimer. Mortimer is the name we gave to our main project, the clock chatbot.

I initially brought the group together to brainstorm about what we wanted our chatbot to be like in the second week, before we were even asked to do so by the teachers. We rather quickly came to the idea of making our chatbot a sort of parental figure, which would assist people in getting their lives in order. The concept was that the more you’d use it, the more it would teach you, the less you’d need it. The shape our object would take was going to be either a mirror or a clock. We ended up going with the latter as it’d better fit in a kitchen.

When we were given were given a personality to work with in the random draw, we got the ‘Ruler’ archetype. This would fit in nicely with what we had planned already by that point. We’d just adjust it so it’d be a bit more oppressive, so that it’d seem like it’d be trying to stay in control of everything. The personality the other group that was going to be in the kitchen got was ‘Rebel’. This would also fit in nicely as an antagonistic role for Mortimer, and vice versa.

You can read my script here.

In week 3 for Story Creation, we each wrote a script for the bot to come up with some ideas for how we could make the conversation flow. We wrote them without discussing them with the rest of the group at first to see what we’d come up with. We had the same idea overall, but the execution was quite different. It was interesting to compare notes on this and I think these scripts not only helped influence the later iterations but also helped us get on the same page. 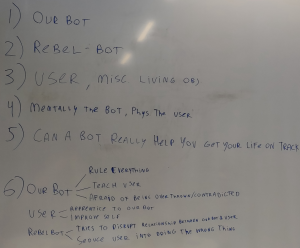 After that, for Story Creation, we were given a simple framework we had to fill out to help us flesh out the character we were working on, as well as it’s relation to other entities in the story. I took charge during this process and helped our group find a basis of personality to work from. While we didn’t keep every aspect of this personality, we did end up using a distilled version of it in the final iteration during the expo. The main feedback we got on this work was that we had to work on a better motivation for our bot’s goals. 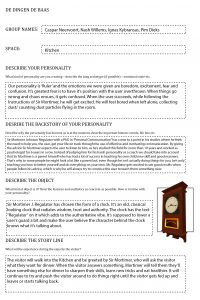 A later iteration based on the previous framework was filled in on our Object Template. We greatly elaborated on our object’s backstory and worked out a lot of our bot’s motivations for its goals. We may have gone a little overboard in a way, as indicated by feedback from several teachers that we had to keep the story simple enough for people to grasp in a few minutes. Or at least so they wouldn’t feel out of the loop too much.

Between this stage and the previous analysis, we also came up with a name for the clock. I looked through quite a long list of older British names, researching a few that sounded pretty good. I eventually ended proposing the name Mortimer to the group, which originally means something like ‘dead lake’. That original meaning didn’t have much of an impact though as this name was both a good name for an old male character, and had the word ‘time’ or ‘timer’ in it. The only thing we added was a ‘Sir’, to make the character seem both wise and old.

You can find our final character sheet here.

We discussed a lot about what we could do about that feedback over the next few weeks, often discussing it with our teachers. We adjusted our goals for the bot a lot both in terms of it’s personality, goals, motivation and appearance. In the final character sheet, the character of Mortimer was greatly simplified. We decided to drop the middle and last name as well most of the backstory we’d previously written up. While it was no longer there, however, it did help greatly in inspiring the final cut.

The biggest change in this final iteration was perhaps the way we expressed his personality. Previously he was just a simple ruler, who wanted to rule over things and boss people around for their own benefit. However, since that was hard to bring across in just a few minutes of dialogue, we tried to express this in a more subtle way by bringing its form into the equation. Instead of making it just boss people around for the sake of it, we decided to make it obsessed with keeping everything on schedule. As a clock, an obsession with timekeeping just felt a lot more natural.

This was also around the time where our group was more divided in our tasks. Pim was mostly working on the dialogue with Ricky. At some point the decision was made to make Mortimer more of a supporting character, a decision the rest of the clock group was not consulted on. It did work out nicely in the dialogue and decreased the amount of paths a user could take through the conversation, but further reduced Mortimer’s personality to an old man nagging at you to stay on schedule.

I was a little disappointed that all that work and brainstorming we put in at the start was mostly brought down to this small fraction of what we had planned. I do, however, understand that despite that, everything we’d done was built on top of the previous iterations. Everything you’ve seen in the final version during the expo was just a tip of the iceberg of work and revisions that went into making it.

One thing I am very glad with, though, is the voice actor we ended up getting for Mortimer. Our goal was someone who didn’t sound too over-the-top posh, but still spoke in an eloquent manner.